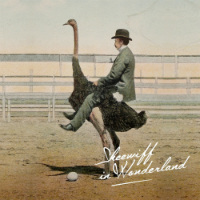 Skeewiff were beginning to get very tired of listening to boring old breakbeats, and of having nothing to do. Once or twice they had peeped other people’s steez but it was all excessively conventional, ‘and what is the use of a breakbeat track,’ they thought, ‘if it doesn’t make you say, ‘what the bloody hell are these two on?’ They were considering in their own minds whether it would be worth seeking inspiration by dropping an industrial amount of lysergic acid, when suddenly a white rabbit with pink eyes ran close by. Burning with curiosity, they ran across the studio after it, and were fortunately just in time to see it pop down a large rabbit-hole under the mixing desk. In another moment down went Skeewiff and that’s things went really mental.

Welcome to Skeewiff In Wonderland, a concept album inspired by a certain masterpiece of Victorian children’s literature with as many tracks as the book contains chapters and, crucially, a shared surreal aesthetic – the genius of which allows them to do whatever the hell they like. Luckily, twenty years of making breakbeat music ensures that ‘whatever the hell they like’ succeeds like dropping a handful of liberty caps in someone’s teapot when they’re not looking. There’s opener Down The Rabbit Hole for example, a symphonic Victorian pastoral which develops into soaring drum n bass and the cinematic vibes of Pool Of Tears which morphs into atmospheric glitch-breaks. And then what do you say to a wobbly bass beat which discovers a Bongo Band-ish soul and penchant for Quincy Jones horns? Check out The Rabbit Sends A Little Bill. Some sitar funk? Advice From A Caterpillar. A glitchy stop-starty Sergeant Pepper-ish noodle? A Mad Tea Party. Little surprise then that The Queen’s Croquet Ground pairs gnarly 90s big beat with Elizabethan harpsichords and Who Stole The Tarts gives a two-step underpinning to a bit of Dixieland jazz. Arguably best of all though, are the wobbly, big beat Louie Louie-isms of Caucus Race with its Hammond organ via a Leslie speaker riff…

…’Wake up, Skeewiff my dears!’ said a disembodied voice; ‘Why, what a long sleep you’ve had! But now run in to your tea; it’s getting late.’ So Skeewiff got up and ran off, thinking while they ran, that they’d better check just precisely what was in the teapot besides tealeaves.
(Out now on Pedigree Cuts)