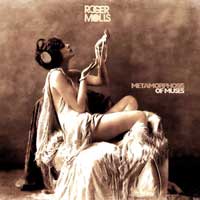 Metamorphosis Of Muses is the second official LP from the ‘man with dusty fingers’ – obsessive crate-digger and beatmaker Roger Molls – and totals sixteen tracks of superbly-produced, epic-sounding, vocal and instrumental hip-hop in the vein, but not the – er – shadow, of early DJ Shadow and RJD2. And if you’re down with the work of Shadow and RJD2 and/or can’t get enough of the darker moments from the Rhymesayers stable, as far as Metamorphosis Of Muses goes you ought to be on it like a car bonnet.

Like the early work of Shadow and RJD2, Metamorphosis Of Muses can be a pretty intense listen at times. In the two years since Molls’ first full-length Rewind his sound has frankly gone to a bit of a darker place replete with moody strings, moody keys and crashing drums. It’s a tone reflected in the sepia-tinted cover image of a half-clad (and mysteriously sexy) belle époque-style ‘muse’ sporting headphones and an expression of dreamy melancholy.

Half-naked hot retro chicks aren’t even the half of it though. Once again Molls plays host to a number of guest contributors, the new ones among whom number fellow French chanteuse Clem Powels and rappers John Maclane, Above Ave, BK, Slik Jack, Crop Circles 720 and the UK’s Detin8. Returning for a second crack at the whip also comes Iowa emcee Ptates – a man who is not well-known enough by far and who smashes it once again on LP standout What’s Your Place. Other highlights include the Powels/ Maclane-featuring hip-hop/ trip-hop Acetate, the creepy, wintry Slik Jack vehicle End Light Tunnel and the almost operatic instro Underground which is basically the soundtrack to your sordid, unwitnessed death at the hands of KGB agents. Or something.

Ten years ago Molls would probably have been on a major label, feted widely and received a cut of the profits for his efforts but like many artists in the digital ‘now’ of 2012 there’s no need for a middle-man, and he’s not only created and produced it himself but released it on his own label. The flipside of that path is the lack of major label promotion and contacts. Metamorphosis Of Muses is a dark tribute to crate-digging, the beatmaking process and vinyl in general (and yes, it will be available on vinyl) – and deserves some major league recognition. Don’t sleep on it. Cop it HERE
(Out 24 September)

One Response to ROGER MOLLS: Metamorphosis Of Muses (2012)