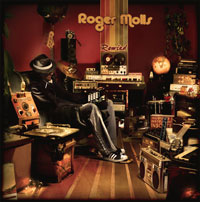 I’ll be the first to admit that the name ‘Roger Molls’ isn’t exactly redolent of the mean streets of the Bronx (and I’m sure Roger wouldn’t be too far behind me) but that’s because he hails from France, a country with a highly respectable hip-hop tradition nevertheless. ‘Rewind’ finds Molls hot on the trail of fellow French beat maestro, Wax Tailor, as well channelling the spirit of RJD2’s debut LP – (which everyone knows is his best one) in its combo of atmospheric hip-hop instrumental tracks and vocal tracks. While DJ Shadow and RJD2 might have got bored of their own atmospheric, sampledelic debuts and explored (respectively) the Bay Area sound of hyphy and slightly prog-like weirdness, Endtroducing and Deadringer cast a long – er – shadow from which ‘Rewind’ emerges looking pretty damn pleased with itself. And well it should – because it’s an impressive debut – eminently well-produced, packed with crisp beats, lushly orchestrated loops and a clutch of decent rappers. Here is evidence that far from ‘getting out more’, staying in a lot can deliver the goods too. Big-up! Press guff below links and video.
(Out now)
Listen to Roger Molls – Rewind
Roger Molls – Myspace

(PRESS RELEASE) ‘Rewind’ is the debut album from talented French beatmaker Roger Molls. Reminiscent of the work of giants like DJ Shadow, RJD2 or Wax Tailor, Molls’ magnum opus nevertheless demonstrates his own unique style. He’s a ‘meloman’ – a passionate, talented individual and his attention to detail in the sound of each track is incredible. ‘Rewind’ is a unique blend of eclectic music, history, and culture. It possesses a touch of funky roots, as well as being influenced by classic French figures of the sixties and seventies such as Serge Gainsbourg and Charles Aznavour, or even Francois de Roubaix. Roger not only creates his own music featuring new U.S. and European MC’s like Above Ave or Art-cons but his own videos too. ‘Rewind’ is his masterpiece…so far
Roger Molls – Rewind – Tracklist
1 Dancing horses
2 Hipology
3 Fun house
4 High speed chase feat. Ptates
5 Exercise mort feat. Art Cons
6 An old jukebox
7 Go on and cry feat. Irealz
8 Bloopers feat. Above Ave
9 Mc’s & blood stains feat. Wrath
10 Get up
11 Rewind
12 Black tears feat. Jay Christ
13 Dusty rose
14 The Listener
15 Shining rain feat. Is
16 Outro