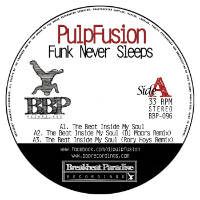 Pulpfusion comes bursting out of the stalls for January with 7-track wax EP Funk Never Sleeps and brings along MorrisChestnut for extra production, Lorenzo Medici for sax action, Kiwi rapper Imagine This for some vocal action and remixers Rory Hoy, DJ Maars and Jayl Funk for some – er – remix action. Good lord! That’s the sort of line-up that should be read in stentorian tones by Brian Blessed. None of that January blues bullshit for Pulpfusion then. Or at least not in the ‘the weather’s shite and I’ve spent all my money sense.’ On the other hand if it’s blues music you were after you’ll be pleased to here that a snatch of Roadhouse Blues from L.A. rockstar-poet-drunkard Jim Morrison features on the b-boy friendly title track (jointly composed with Morris Chestnut and featuring Medici) and positively need to change your underwear when you hear electro-blues-big beat monster closer Feelin The Blues which also comes touched by the hand of Mr Chestnut. Nothing like going out with a bang. Blimey – what else is on here? How about the amping big beat/ electro-tinged Imagine This-featuring Beat The Clock? Or the super old school breaks n dope soul-sister hook driven The Beat Inside my Soul. And I haven’t even mentioned the remixes. Four words: ‘DJ Maars – reggae rerub’. Don’t sleep.
(Out 19 January on Breakbeat Paradise)