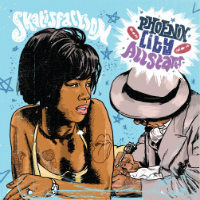 The stock-in-trade of ska supergroup Phoenix City All-stars (boasting members of Kasabian, Pama International, The Bongolian, The Delegators, Sidewalk Doctors, Intensified, Dub Vendor All-stars and The Loafers) is Studio One ska-style versions of classic standards. As stock-in-trades go, it’s not a bad one and when it’s executed this well, it’ll have you skankin like Frankie Dan. Whereas first LP Two Tone Gone Ska re-imagined seventies and early eighties Two Tone classics, the band’s second effort, Skatisfaction, finds the band cherry-picking Rolling Stones numbers from the decade between the early 60s and the early 70s to have a pop at. Nothing past 1971, though obviously. You’ve got to stick to the good stuff, right?

One of the particular triumphs on this album is the coup of having collaborated not once but twice with Trojan Records legend Freddie Notes – a man who’s no stranger to cover versions himself having done his own 1970 version (with The Rudies) of Bobby Bloom’s 1970 hit Montego Bay. Now he’s also responsible for a ridiculously catchy vocal on this LP’s standout track and current single – the blazing dancefloor bounce of Satisfaction as well as a stirring vocal turn on the uptempo skank of Little Red Rooster. Sidewalk Doctors’ Nathan Thomas is the other main vocal contributor and he provides a soothing counterpoint to Notes’ raucous stylings on a bittersweet rocksteady version of Wild Horses and the monkey’s second favourite cut (and LP closer) – a huge version of Honky Tonk Woman. The remaining tracks find our ska-tanic majesties deliver six pumping ska instros including Time Is On My Side and a storming Paint It Black. All in all – it’s enough to make you get yer ska ska’s out!
(Out 4 November on Hotshot & Scorcher)