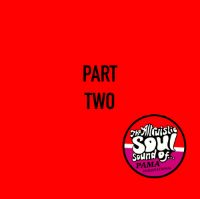 The altruism of Pama International seemingly knows no bounds as they unleash another full set of sixties soul-style covers and originals entitled Part Two following swiftly in the wake of last week’s 45 which, as you might expect, contained two cuts off this particular release by way of a lead single. The LP’s name of course is a reference to the fact that this is the second part of the project launched back in February with album The Altruistic Soul Sound Of Pama International. And you have to concur that is an impressive rate of soul provision in one year – especially for a band that made its name putting out rocksteady and early reggae. Indeed it’s the sort of thing that practically begs closer inspection…

1. SATISFACTION
If you can’t open a soul album with an early sixties soul revue style cover of the Stones classic, when can you? Not the first time Pama main man Sean Flowerdew has had a crack at it (check Phoenix City Allstars’ blistering ska cover) but he always nails it good.

2. I CAN NEVER SEE
A heartwarming original soul groove in the classic mould that chugs pleasantly along showcasing Pama’s winning choice of current singer – Jewels Vass.

3. SKIES ARE BLUE
Hello, Pama are covering themselves. Yes, you did hear a vocals and guitar only version of this on the band’s Love & Austerity album a couple of years ago.

4. COME FOR ME (COMFORT ME)
Future classic time – it doesn’t get much more northern soul than this dancefloor heater which better be out on 45 some time soon.

5. FEEL LIKE JUMPING
Second of the three covers hereon and reverses the Pama trend of rocksteady covers of soul tracks with an uptempo soul cover of a rocksteady track. Keeps the faith entirely with the original – albeit in a Wigan Casino stylee.

6. I CRIED TIL I STOPPED
a.k.a. ‘Part Two’ – of Pama covering themselves. Yep another one from Love & Austerity – still in torch song mode but now with organic drums and big horns.

7. IT’S TOO LATE
The final cover and as dope as the others with the band rendering the Carole King track as a smouldering piece of chanking soul.

8. SEEMS LIKE WE’VE GONE TOO FAR
No, you definitely haven’t, we want more, which means this horns-led torch song hits the right bittersweet note by way of an ending.

COMMENTS: Pama International has always been a byword for quality musicianship with that retro vibe but in Jewels Vass they’ve really found a singer with a back in the day voice and the soul chops to deliver all the rocksteady and soul they want. Long may this union continue.