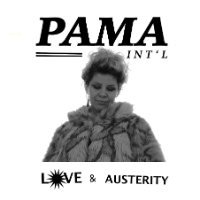 Time to rock the rocksteady once more and not before time either since Pama International’s latest LP Love & Austerity has been out a month already. Mind you, it’s not like the band themselves don’t know a thing or two about tardiness since this LP – their tenth – is their first in seven years. But what can we expect of these former BBC Radio 6 Rebel playlist winners who in 2006 became the first new signings to Trojan Records in thirty years?

Well, production remains in the more-than-capable hands of PI founder-member, organ player and songwriter Sean Flowerdew and guitarist Lenny Bignell though crucially the line-up has changed since vocals are now the province of Mad Professor and Zion Train collaborator Jewels Vass along with Anna Uhuru of Abstract Orchestra. The effect on the band’s sound is clear from the start as the album opens with a sureshot cover of Martha & The Vandellas’ Heatwave which does a pretty good job of sounding as if The Supremes had knocked out a rocksteady version of the song for jollies while Berry Gordy was out of the studio and before they did the cover they actually released. It’s not the only cover featured though. John Holt’s Man Next Door gets the scorching early reggae treatment and there’s also a sweet rocksteady take on John Loudermilk’s early 60s ballad Then You Can Tell Me Goodbye. Which is interestingly ironic because the album also features an original ballad without an offbeat rhythm, I Cried Till I Stopped, performed in the musical style of Loudermilk’s early 60s ballads. Another original, Austerity Skank, nods to The Specials’ Ghost Town not just with its similar theme but also the sparse, moody sound and even some ghostly ‘oohhhs.’ Also included are the Mittoo-ish instro Gasoline (not an Audioslave cover) also available in ‘duboline’ version and discomix versions of Heatwave, Man Next Door and Austerity Skank. Plenty of love then and damn if it ain’t needed to get you through the man’s never-ending austerity.
(Out now on Happy People Records)

Posted on 9th September 2017 no comments