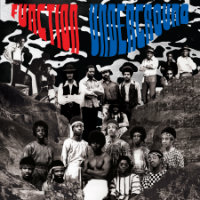 A title like Function Underground – The Black and Brown American Rock Sound 1969-1974, might have you believing that this staggeringly good new Now Again label comp. is going to assail your ears with a wall of guitar feedback along the Hendrix/ Black Merda axis. And to be fair there is a bit of that sort of thing on here (not that you’ll be complaining, you understand) whereas in actuality – the whole project is decidedly funky. Not that the funk/rock borderline hasn’t always been an indistinct point of crossover anyway (the whole Parliament-Funkadelic collective for one) but whichever way you cut it – generally – (and yes, of course there are tracks which are exceptions) the above named acts (none of whom feature here) were always a bit more about the guitars than they were about the drums and the bass and, as such, not exactly b-boy and b-girl friendly.

But that’s not a criticism you can level on this at the Ciseneros And Garza Group’s fuzz-guitar cover of I’m A Man or Ebony Rhythm Band’s very similar Drugs Ain’t Cool groove. It’s especially not a criticism you can level at Creations Unlimited’s ‘holy grail’ guitar-led funk 45 Corruption Is The Thing and the list goes on. Black Conspirators’ Just Got To Be Free is guitar-heavy blaxpoitation funk, opener There’s A Wrinkle In Our Time by 1984 may kick off with a very sixties psych-effects flourish but from then on things broaden out into Curtis Knight-ish funky soul which is also a good reference point for LA Carnival’s Blind Man. In other words this contains lots of dancefloor-friendly cuts most of which either could (and occasionally have) also appeared on funk comps. but by dint of a heavy guitar presence justifiably appear here also.

Then of course there are the tracks where the psych and rock influences are much more overt. The Revolution’s The Siesta forms a bridge between the funkier and the rockier tracks and has a similar vibe to Parliament’s Breakdown which would have fitted right in. Michael Liggins and the Super Souls’ piccolo-toting, drum and guitar-soloing Loaded Black is pure hippy psychedelia as is the We The People cut, Function Underground, which gives the album its name. Stone Coal White’s self-titled track however, is precisely the spaced-out, acid-fried, wah-wah-drenched material that this compilation’s title evokes, Blacklites’ BL Movement is organ-led psychedelia and Black Maffia deliver a chugging, heavyweight take on Sly Stone’s I Want To Take You Higher. Which leaves just one track that vies with the Creations Unlimited one for the pick of the bunch – Jimi’s Guitar Raps With The Bass. It’s by Jimi Macon as it turns out though it could easily have been a very early instrumental Funkadelic track as it consists entirely of an absolutely filthy Eddie Hazel-esque wah-wah guitar groove. If you’ve ever wished you could have an album of what the spooky black GIs at the Do Lung Bridge outpost in Apocalypse Now were listening to – this is it.
(Out now on Now Again HERE)