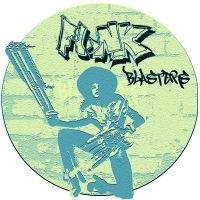 Super prolific Morlack is a man whose sole mission in life seems to be ensuring that that little bitch called ghetto funk stays funky and to that effect he closes the year delivering his message hard and rough with the Cruel Breaks EP. Not only are you’re going to take it – you’re going to like it. And then you’re going to beg him for more. This five tracker sees our man’s production pumping heavier than ever and gag-ball tight with sample sources that carve a prodigiously promiscuous route through genres yielding a variety and originality that sets him apart from the rest of the scene.

Anyone who knows Morlack will be aware of his predilection for P-Funky action and they won’t be disappointed. Among the big booty beats though, you can also expect a host of crazy other shit. There are music and vocal samples from nineties ska-funk-rockers Fishbone on midtempo groove It’s hot (So Take Your Clothes Off), French hip-hop crew Supreme NTM (formerly NTM) on uptempo bump Do It To Me, and Dizzy Gillespie on the ghetto mambo craziness of Mamboteca. There’s also final track Tical which sounds a bit ghetto metal in a Pulpfusion stylee though it actually uses a gnarly bit of P-Funk and The Cure (!). My favourite, though, is banger Refugee Camp based around a sample of Suicidal Tendencies/ Jane’s Addiction funk-metal side project Infectious Grooves and using a Cypress Hill vocal which comes across as a nasty fat ass bit of dirty Miami Bass. Take it bitch!
Out 6 December on Funk Blasters

Posted on 5th December 2012 no comments