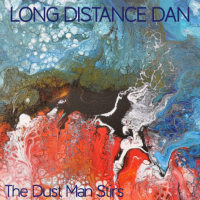 The dustman stirs? Oh what – like on Wednesdays when you get rudely awakened by him and his mates? No Dougal. Not exactly. No, this’ll be The Dustman Stirs as in the latest release from that purveyor of psychedelic breaks, Long Distance Dan, not to mention being our man’s follow-up to 2015’s The Other Side Of The Sky EP and his full-length debut. And that’s ‘full-length’ as in a whopping eighteen tracks, though the LP still clocks in at around forty-five minutes. A quick bit of mental arithmetic will tell you that eighteen tracks in forty-five minutes must mean some of the tracks are rather short (which is indeed the case) but as we all know – it’s not the length it’s what you do with it. And what our man Dan does with every track is to fly the freak flag high.

It does seem like some sort of psych-funk-breaks renaissance is currently underway with multiple big releases this year already from the likes of El Michels Affair, MnP, Markey Funk, Duct Tape and The Bongolian to put alongside major drops from the likes of Calibro 35, The Grits and LDD himself in the last two or three years – all well-documented on these very pages. Alongside these can now be added The Dustman Stirs – an LP that is mostly instrumental though it does feature vocal turns from Icelandic hip-hoppers Cryptochrome over the lurching drums and menacing but heavily-filtered swirling sounds of Rescue You and on the ‘garage rock meets ear-bleeding gabba-speed drums of After Omega. Hmm – not your standard fare then. No indeed, for elsewhere on the album can be found the splendid Final Buzz – all throbbingly lo-fi breaks with a surf-rock feel, the vaguely Vangelis-like prettiness of Cloud-Stepping and the paranoid bleeping funk of Step To The Moon which sounds like R2D2 at the get down. The monkey’s favourite cut however comes roughly three-quarters of the way through and opens with an ominous hum before launching into a muscular loping funk break. As with releases by many of the other artists named above, the long shadow of Delia Derbyshire is all over this though it seems that is never a bad thing. Well worth your time.
(Out now on Dusted Industries)

Posted on 5th November 2017 no comments