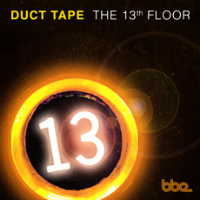 Man – what can’t duct tape do? It’ll hold bits of your car together, hold musical equipment cases together (hell, hold musical instruments together), temporarily patch up a surf board and plug any gaps in your funky psych collection. No really. Or at least Duct Tape a.k.a. Berlin-based psych duo Batsauce and Wynton Kelly Stevenson will. Now on their second album the pair are still all about filtering Wynton’s falsetto vocals for maximum trippiness and heavyweight beats from Batsauce but things are much funkier than on debut Less We Can.

Opener Luxury Apartment for example might employ moody, echoey FX but that beat is a stank little shuffle while Play Thang employs muted rock guitars over a syncopated thump. No Escapin doesn’t just channel raw sixties funk beats but adds in horns as well, albeit distorted (well – it wouldn’t have that heavy psych fuzz feel otherwise would it?) and closer Star opens with a clattery funk drum fill and rolls along on a head nod beat and throbbing bassline. If this album has a fault it’s that the two best cuts are by far the shortest. One of these – earworm Stop Singing My Song – in fact is little more than a skit and chugs along Money Mark-ishly for just over than a minute when it could easily have borne being sustained for longer. The LP highlight however is the most upbeat cut on the album Goin Back Home and it is here that the band best channel heroes and sixties psych pioneers 13th Floor Elevators kicking off with a very Roky Eriksson-ish shriek and then delivering just under two minutes of blistering drums, pounding bass and keys and an anthem to the joys of rural living. Still, two minutes though. Surely there’s got to be an extended version of both of these to come out on a future seven inch?
(Out 14 April on BBE)