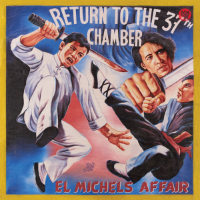 Have you heard the one about the funk and soul band who do covers of sampled beats by the hip-hop band who chopped up originals by old funk and soul acts?
Of course you have! Obviously the band in question are El Michels Affair – the house band of Leon Michel and DJ Akalepse’s excellent Big Crown label – whose ‘cinematic soul’ sound has not only seen them provide live backing for Wu-Tang Clan and solo Wu performances and get sampled on record by Ghostface Killah but cover a whole slew of Wu-Tang tracks on 2009’s Enter The 37th Chamber and now, imminently, cover another shedload on that album’s magnificent sequel, Return To The 37th Chamber.
Hold on. How do you ‘cover’ programmed hip-hop tracks that feature rapping and looped samples of old funk and soul records? Don’t you end up with something like the old funk and soul tunes?
Er – not exactly no. Think instrumental hip-hop but played live. RZA paired drum patterns with loops chopped from old soul records and discarded the bits of said old records that he wasn’t using; El Michels Affair more or less play RZA’s new compositions with live instruments.
Ok, but RZA used vocal loops as well as instrumental ones and then there’s the small matter of Wu tracks having emcees on them…
Well, as far as the vocal loops go (and as luck would have it) Big Crown Records does happen to have a number of excellent vocalists in house – not only mighty original soul legend Lee Fields but also the recently retro-soul Nicole ‘Lady’ Wray and wistful psych outfit The Shacks. As for the rappers – well – this is isn’t hip-hop – it’s cinematic soul – a genre built upon atmosphere and evocation – it’s all about the FX for maximum psych factor!
So you’re telling me there are no samples on this whatsoever?
Alright well maybe there are a few. I can’t imagine anyone managing that perfect an imitation of the crazy Ninja Queen’s laughter from Shogun Assassin, for example.
Ok – so which are the best cuts?
Ah – a proper question. Well, this is one LP you’ll want to hear all the way through for starters – what you might call all Killah no fillah. Recent single Iron Man is a veritable earworm, Shaolin Brew is a hypnotic psychedelic epic, and all the cuts with vocals stand out – Lee Fields’ turn on ODB cover Snakes, The Shacks’ haunting hook in combo with heavy drum break on Tearz and over and above all of these, the Lady Wray-featuring Method Man cover All I Need. She only sings the hook twice but you’ll be well and Wu-ly snared forever. Check it below.
(Out 14 April on Big Crown Records)