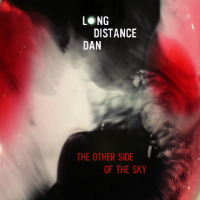 The Other Side Of The Sky EP finds Long Distance Dan (a.k.a Dan Larkin of, among other things, TheLeftHandSide blog) taking it upon himself to re-imagine funk as a crunchy, fraught, psych-out. Picture what might have happened on that trip to ‘Nam if James Brown had taken an excess of LSD and become funk’s Colonel Kurtz. The Other Side Of The Sky is what he might have found a fairly long distance up his own personal Nung River. Groovy opener Gotta Keep On is like an edgy night at an ‘entertain the troops’ gig, Flying Colours is more of a Vietcong night attack while the contrastingly slow, spooky and spaced-out 3 Miles From Home conveys what it might be like to drift up in a fuel-less, ammo-less gunboat to a jungle station, the banks lined with hundreds of painted, spear-carrying figures while on an acid comedown. It’s not unlike something the Heliocentrics might do actually, or even The Grits. Just a lot faster (in the main) and after ingesting a lot more ‘purple haze.’
(Out 9 March on Dusted Industries)