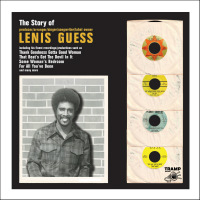 The Story Of Lenis Guess? Let me guess! Tramp Records get another five star rating for the latest installment of their divine mission to deliver career retrospective LPs of unsung heroes from the golden era of 60s and 70s funk and soul? Got it in one! Yes, the man in question this time is the influential figure behind the ‘Norfolk Sound.’ And I don’t mean Alan Partridge! No, we’re talking about the legendary Lenis Guess and the Norfolk in question is Norfolk, VA. The ‘Norfolk soul sound’ was the sound of all things funky in the state of Virginia from the tail end of the 60s to the middle/ end of the next decade and encompassed everything from pre-funk soul stompers to a cleaner seventies brand of soul. It’s all arranged chronologically of course by Tramp Records owner and digger-supreme, Tobias Kirmayer in order to facilitate maximum listener appreciation of the development of Guess’s output.

One thing that wouldn’t do in the case of Guess is to underestimate his influence on soul and funk in Virginia back in the day given that he sang, wrote, arranged, produced, ran a record label (DPG Records) and a recording studio (Brockington & Guess) in the time period covered by this album. Consequently (and unusually) for a Tramp ‘Story Of…’ release, this one contains not only tracks attributed to Guess or collaborations between Guess and others but also tracks attributed to other artists completely although Guess was obviously prominent behind the scenes. In short this amounts to twenty-five choice cuts (including all but one of the six that appeared on Jazzman Records drop The Norfolk Soul Sound which appeared earlier this year) and every one of them is dope. Opener Working For My Baby and What Can I Do But Cry are surefire Northern Soul dancefloor bullets, Little Richard III’ s She Broke Down is a stank-funk chugger and Josephine Jones’ Sweet As Candy is a prime slice of sister funk. Standing above even these though is funky-soul holy grail Why Why Why’d She Leave Me?. Why indeed if Mr Guess was such a legend? And he’s still active too – see link above. The Story Of Lenis Guess then – an essential funk soul narrative.
(Out 7 July on Tramp Records)