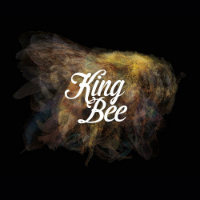 So the MB crew were all there today, in the new office of the new premises of Monkeyboxing Towers, basking in the sun as I was wading through an inbox that had become hideously clogged as a consequence of the recent big move and only having mobile interweb. Funky MB tea lady Loretta May Drew and MB bike courier (and BMX bandit) Robbie were having a heated debate about the state of all things funky…[sample dialogue:
Robbie: What’s all this old shit we’re being sent, where’s the wobble?
Loretta: Hush up fool! This grown woman music! Crap you listen to got less soul than a shoe with a hole!]…when I uncovered King Bee (no, not that King Bee) and their self-titled debut album. Which only intensified the argument – (not stank enough for Loretta; too old-sounding for Robbie) so it was a while before we noticed MB taxi driver ‘Jazzy’ Dave – apparently in raptures. When he finally came to he was positively buzzing about King Bee’s efforts and started rhapsodizing at some length, “Loads of sax and guitar solos! An eleven-plus minute closer! Vibraphones! Piccolos! A wicked jazzy car chase opener – which is even named after me – Return Of The Dave! This is the bes-oww!” His comments were brought to an end by Loretta stabbing him in the ribs with her afro comb. Dave was right about one thing – it’s all about the opener…
(Out now on Beeswax Records)