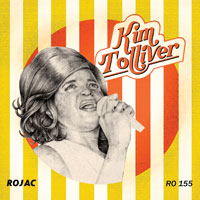 Kim Tolliver must have been the unluckiest southern soul queen ever. If you want a measure of how bad things got for her, consider first that she had the vocal talent to rank with Aretha and Candi but ended up leaving the music business for real estate. And what is it that could possibly have brought things to such a cataclysmic pass that selling property alongside spotty bullshitters in bad suits was better than singing? Try piss-poor promotion by a succession of record companies. She spent years gigging before she cut her first single in ’67 which failed to make an impact. True, her next four ultra rare singles on Rojac records (collected for the first time on cd here) made more of an impression but they were followed up by two LPs, neither of which were promoted by the respective labels on which they were released (stand up Fantasy Records and Chess Records) and deleted shortly after release – despite her rep as a hard–working live singer with the skills to move the crowd. Minor success on the UK northern soul scene ensued with southern soul/ disco crossover banger I Don’t Know What Foot To Dance On (not included on this) but not enough to keep her from becoming an estate agent. And just when you thought things couldn’t get any worse, it transpires that fate was last in line to kick a woman when she was down and Tolliver developed Alzheimer’s in the nineties.

This relatively short (eight tracks) prestige release goes a little way to redressing Tolliver’s catalogue of woes (somewhat late admittedly, though better late then never) and setting the record (well cd, anyway) straight. It contains her Rojac and Tay-Ster singles packaged (according to PR) “great memorabilia and new liner notes.” Watch out, particularly, for funky (northern) soul bangers I Gotta Find A Way and You’re Trying To Cop My Stuff. It’s a sho’ nuff thang.
(Out 14 November on Rojac Records)

(PRESS RELEASE)
Despite recording albums for Chess and Fantasy, most of her singles output was on the smallest of indie labels with little or no promotion despite some incredible releases.

Probably her best 45s were recorded for Rojac and Tay-Ster Records, owned by legendary Harlem entrepreneur Jack Taylor, who was also responsible for guiding Big Maybelle’s career in the ‘60s. Kim’s style epitomizes deep and southern soul singing at its finest. She can wring every last ounce of emotion out of any lyric, as her performances on “Where Were You” and “I’ll Try To Do Better” may more than amply prove. She’s not afraid to belt it out on up-tempo numbers such as “(You’re Trying To) Copy My Stuff where you just know she’s going to beat the s**t of any woman who tries to take her man.

This is the first time any of these Rojac and Tay-Ster singles have been released on CD. Great music deserves the appropriate presentation, and this retrospect is beautifully packaged in a limited edition casebook with great memorabilia and new liner notes.

The Kim Tolliver revival started in 2008 with the highly acclaimed Reel Music release of her classic ‘Come And Get Me’ album and this proved to be the perfect re-introduction of this lady to a new audience discovering classic soul for the first time! Phase II starts now with this amazing collection.

Posted on 8th November 2011 no comments