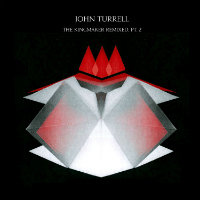 When John Turrell got a well-deserved re-release of his solo debut album, The Kingmaker, last year on Jalapeno Records, it was surely only a matter of time before the remix package came out. Or rather packages since this is The Kingmaker Remixed Part 2. But where on earth was the singing half of Smoove & Turrell (the jewel in the crown of Jalapeno Records’ artist roster) – going to find a remix producer of the requisite quality? I like to think it went a bit like this:
Smoove: ‘Morning John.’
John Turrell: ‘Morning Smoove. Ahm looking fre a remixer. Dyer knaa anyone?’
S: ‘Well noo yee come te mention it, ah could dee it. Ah dee hev some skill in tha area.’
JT: ‘Canny one thanks – but ah need more than one bloke te dee it.’
S: ‘Er well wi could ax the label. Ah expect they might knaa a few fowk – Soopasoul, Wrongtom, yee knaa. Yee could even ax tha bloke – what’s his nyame? Nick? – whee did the originals if he wants te dee one. Mind yee, as yer best mate aa’d expect te dee more than one remix, leik.’
JT: ‘Wheyaye. Maybe a dub version or summat? Hey – tha wez thirsty worrk. Beeah?
S: ‘Well it’s ernly ten o’ clock but aye – gan on then.’
Yes, that’s almost certainly how it was. Thus it is that Smoove has rendered the Geordie ghetto soul of Stella Maris into a broken disco beat adventure, Soopasoul has wrenched the soulful trip-hop shape of Chasing Shadows into a more dubby and minimal trip-hop shape, Wrongtom has applied reggae magic to the wafty bluesy electronica of Wrong Time and Nick Faber has stripped down the neo-blues groove he created for To The City. Oh – and there’s the dub version of Smoove’s take on Stella Maris too of course.
(Out now on Jalapeno Records)