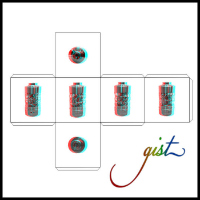 Like French duo Air? Like that talk-box hook from 2Pac’s California Love? The Spyder D sample on Latyrx’s The Quickening? The Rose Royce sample on the Beasties’ Shake Your Rump or their Eggo sample on Make Some Noise? Yeah? Then you’re going to shit when you hear Miami outfit Gist and their self-titled debut LP because they very obviously do too. In fact this is prime electro-funk from the ‘Gunshine State.’

More muscular than Air, this is also more organic in feel than the early hip-hop/ electro funk pioneers especially in the first two thirds of the album where things are equal parts syncopated breaks, Prince-like guitar licks and dirty synth effects punctuated with both vocal samples and original vocals. Later on, things get a bit harder and heavier though, especially by the time you reach closer Find The Level which finds itself in a very Mantronix/ Hashim-ish class. Elsewhere, Unstoppable turns on a Billie Jean-esque bassline and opener Trust In Lust or Groovicide are the closest you’ll get to Air-ish whimsy while it’s the super raunchy squelch of We Belong To The City and The More You Know that are most likely to win converts.

A more than adequate soundtrack to all manner of sleazy goings on from Jacksonville to the Keys.
(Out now HERE)