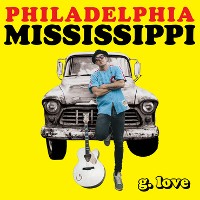 Here we are then, two years on from the well-received Juice LP and G Love is back with the new one – Philadelphia Mississippi – still sans Special Sauce, but hooking up with a multitude of guests. While his releases usually deliver some sort of combination of hip-hop and blues, G has, in the past experimented, tinkering with the template to let the blues (on Coast To Coast Motel) or even the country blues (on Fixin’ To Die) dominate while at other times keeping sets funky but focussing on a higher preponderance of mellower sung (as opposed to rapped) cuts. Despite all that, our man is always at his best when he delivers his material super raw à la his ’92 album debut G Love & Special Sauce and 2014’s superb Sugar – so enquiring minds will be keen to know which direction has he gone in this time. Well, Philadelphia Mississippi was so named to celebrate the dots that join his love of Philadelphia hip-hop to the Mississippi Delta blues and features a range of hip-hop and blues heavyweights. Sounds promising, but how has he done?

2. MISSISSIPPI (feat. Alvin Youngblood Hart, RL Boyce & Speech)
..and it’s a seamless segué from illy Philly to the Delta blues without a break (which is probably the point) since there’s no break and the drums are pretty much the same, though the kicks have been toned down.

3. MY BALL (feat. Freddie Foxxx & Jontavious Willis)
I’m pretty sure the lyrics to this stank-funky blues groove are ‘She’s my ball’ not ‘Shave my balls’ though whether ‘she’ will prefer the metaphor or the imperative is a different question.  Freddie Foxxx seems game either way though.

6. HIPHOPHARPIN (feat. Alvin Youngblood Hart)
Well more of the harpin’ than the hip-hop if we’re being honest. You have heard G before though right? He does like a bit of mouth organ and he sho’ do like to make it funky.

7. LAUGHING IN THE SUNSHINE
Inexplicably the second single (after Love From Philly) a jaunty uptempo whistle-featuring slice of whimsy which is neither hip-hop, nor blues and certainly not hip-hop blues.

8. I AIN’T LIVING (feat. Tikyra Jackson)
Oh yeah – G likes to let other people do share or even do lead vox sometimes. On this, he does a mumble-rap; Tikyra Jackson leads the way. ‘Bout as poppy as G gets.

10. IF MY MIND DON’T CHANGE (feat. Sharde Thomas)
…annnd another one. This is the best of the bunch though. Props to Sharde Thomas for the best non-rapped guest lead.

12. THE PHILLY SOUND!
On which G talks through the history of the Philadelphia hip-hop scene over another bluesy jam

13. SHOUTS OUT (feat. TRENTON AYERS & R.L.Boyce)
On which G, Trenton and Boyce amiably ramble away over another fuzzy, funky and, yes, bluesy jam.

COMMENTS: Praise the lord for Gareth ‘G Love’ Dutton and his impressive longevity as an artist. The man’s career is now heading for the thirty year mark and while contemporaries have either fallen by the wayside, changed their style for the worse, or just plain died, G is still knocking out his unbroken-so-it-don’t-need-fixin’ brand of loose-limbed hip-hop blues. Alright so this isn’t – say – Sugar but damn this man already has multiple all-time classic LPs under his belt! There is still plenty to enjoy however and perhaps what this captures more than any other of G’s studio LPs is the feeling of being in the same room (or possibly, given his Soul-B-ques, the same back yard) with him.