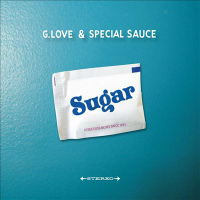 Amazingly, G Love has been around for twenty years. Twenty years of fusing hip-hop and blues. Known for seven studio albums (with his band Special Sauce) and three solo albums that fuse hip-hop. With blues. Man – how do you pigeonhole that if you’re a giant music retailer? Tricky yeah? Maybe ‘hip-hop’. Ooh no – it’s a bit too bluesy. ‘Blues’ perhaps? What? It ain’t 1944! Maybe put it in a couple of genres? What about hip-hop and blues? Oh no wait – I know – ‘rock’. Which is the main reason why this review is a month behind Sugar‘s UK release – that and the fact that the monkey isn’t on Brushfire Records’ promo list.

But don’t let that put you off. Sugar reunites the original line-up which means that Jim ‘Jimi Jazz’ Prescott has returned to rejoin G and drummer Jeffrey Clemens for easily their best LP since ’99’s Philadelphonic. Yep, that good. Production is halfway between the lo-fi raw of the band’s debut and the cleaner sound of Philadelphonic and while the tracks have that good ol’ sloppy jamming blues-hop feel of the first two LPs, the hooks are those of the more accessible Yeah It’s That Easy and Philadelphonic. Nobody mention Electric Mile. Highlights include opener Come Up Man which is all twanging slide blues and live bar-room breakbeats while Nite Life adds ska-type offbeat guitar as G reveals how, “Whiskey and women, baby/ almost wrecked my life.” We’ve all been there. LP stand-out though is Nothing Else Quite Like Home with its feel-good singalong chorus, stomping organic breakbeat and chopped up Smoke On The Water riff. Sugar then: gritty granules of funky blues-hop, and sweet hooks. Yeah – still got sauce.
(Out now on Brushfire Records)