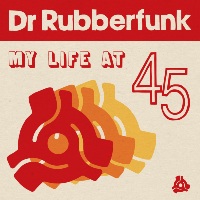 If you’ve been awake over the last eight months, you’ll know Jalapeno stalwart, Dr Rubberfunk, has been dropping a series of hot vinyl 7s every couple of months entitled My Life At 45 – each featuring a couple of nuggets from the good Dr’s studio plus a bonus beats type cut. What better plan next than to assemble all the tracks (sans bonus beat cuts) together on vinyl LP? That means a second chance to get your hands on (deep breath) the Balearic breaks of How Beautiful, the Stax-ish twelve-bar geetar blues n keys-driven breaks of Pressure Cooker, sax-y jazzstrumental Canvas Cathedral, the slow n low jazzy breaks of Izo FitzRoy vehicle A Little Blahzay, the breakbeat soul-n-blues of a second Izo FitzRoy vehicle A Matter Of Time, the funky Blue Note-ish Slim’s Mood, excellent John Turrell-featuring blues funk slab Boom! and the wafty jazz-funk of Steppin’ In.

Of course that would only mean an album of eight tracks and no incentive to cop it, if you’d already got all the 45s unless…he included some new tracks! Which of course he does – three to be precise. The first of these is With Love, a piano-led, seventies-style soul slowie featuring Stephanie Whitelock while the second, also featuring Ms Whitelock, provides a more soul-bluesy groove à la A Matter Of Time. The third and final new nugget is Longshore Drift, a closing instrumental of the decidedly cinematic soundtrack variety. Dr Rubberfunk then, when he medicines you, you can’t say you don’t get variety. Or class.
(Out now on Jalapeno Records)