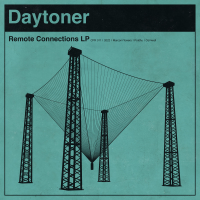 Given the adverse global social conditions (at least physically) while Daytoner were attempting to write their second studio LP it’s perhaps not surprising that the band named the new one Remote Connections. Nor, indeed – given that they’re a Cornish band – that they took the opportunity to celebrate Cornwall’s early role in global communications with an two-tone image of the Marconi Towers (built in 1902 at Poldhu so the first trans-Atlantic radio transmissions could be made, fact fans!) as the LP cover art. But while the such stark graphic minimalism might raise expectations of, say, Kraftwerk-like content, anyone who’s heard Daytoner before will know that the LP is far more likely to yield a soul-drenched and funky array of content – which, of course, proves to be the case.

Remote Connections features twelve tracks, including the four which appeared on the band’s two most recent (and massive) vinyl 45 singles. The first of these saw the band unleash on the public this LP’s opener, Shout Love, on which singer Lucy Richards’ distinctive vocals combine with a great big Screamadelica-era Primal Scream-tinged slab of joyous horns and organ-drenched funky soul instrumentation. The other cut from that single, My Sweet Baby, appears towards the end of this album and co-opted both the tune and samples of Jackie Wilson’s Who Who song for an uptempo dancefloor groover. The tracks comprising the second single are the squelchy funk of Time which is the second cut on Remote Connections and the slightly more contemplative but still dancefloor Keep It Moving which is the third, thus giving this set an exceptionally strong opening. Not that the rest of it lets the side down, for this is that rare beast in 2022, an LP where you want to listen to the whole thing. Just A Boy is a lovelorn slice of downtempo breaks, while Blood Out of A Stone ups the funk quotient again which lasts through Thank You, Jet Speed and Numbers until the torch song emoting of The Hurt Inside. The album’s final trio of cuts consists of the live crowd sample-assisted funky groover La La Land, aforementioned banger My Sweet Baby and the secular-lyrics-but-gospel-style funky soul of Searching. This puppy is out on limited vinyl so now you’ve had the heads-up, make sure you get heed Lucy Richards’ Spanish vocal on the breakdown of Time, ‘El tiempo, es un regalo,” and get on the case sharpish.
(Vinyl out now/ Digital out 10 June on Cabin Pressure Recordings)