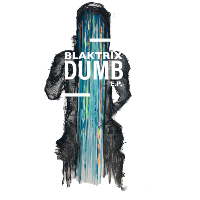 News of track The House of Immortal Ironfist last autumn provided incontrovertible evidence that Cardiff-based MC Blaktrix was back after a seven-year absence and suggested a new release was on the way. And here it is – the Dumb EP featuring said Anime-inspired cut, new single 5 Euro Shades and more besides. The title track kicks us off with a reliably old school beat courtesy of Sir Beans OBE and our man on the mic voicing valid concerns about the inanity of popular culture whilst simultaneously reflecting on the passing of the years, “In the 90s we smoked at the cinema/ now we detox and drink cider vinegar.” House Of The Immortal Ironfist is up next with its dreamy beat and then it’s the turn of single 5 Euro Shades in which fake Ray-Bans from Spain assume a near mystical presence amid the brag-raps. The final original cut is Square One on which BT is caught in a relationship that’s preventing him moving on. Comes with a radio edit of Dumb, a Fracas remix of Square One which employs a more fluid beat, and two further versions of 5 Euro Shades: an extended take on the original which provides space for Culture Vultures to squeeze on the mic too and an epic Moneyshot remix. Cop all three versions of 5 Euro Shades now at a name your price deal.
(Out 31 July on Winger Records)