BLAKTRIX: The House Of The Immortal Ironfist (Prod. INDIGO CHILE) 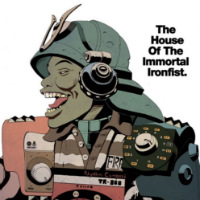 Well blow me down if it isn’t UK emcee Blaktrix making a return on the Indigo Chile-produced The House Of The Immortal Ironfist after a very long absence. It’s not unheard of for an artist to take a year off but Blaktrix has just had seven in a row. Lucky bastard. Turns out he’s been travelling the world in search of enlightenment which resulted in being ‘blessed by the gods’ and honing his lyrical skills in the house of the Immortal Iron Fist. We’ve all been there. And so now of course it’s all about knocking “back the saké,” and breaking “bread in the web of Anansi,” over Indigo Chile’s dreamy boom-bap beat which – it has to be said – is as entirely agreeable as it sounds.
(Out 19 October HERE)