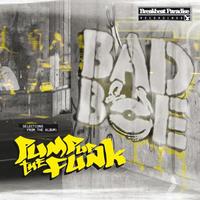 Pump Up The Funk? Steady on Boe – is that wise? Pump up a genre of music already so libidinous it’s named after the stink of sex? Mind you, we’re actually dealing with ghetto funk here – not a form of music renowned for restraint – and so it is that producer Badboe gets out his Danish funk enlarger and proceeds to pump for all he is worth. The Claire G Phunk What You Gonna Do For Me is a fully paid-up wobbler with electro trimmings, Sweet Games has got its disco on and Green Power Funk is a fat slab of wah-wah-augmented bass judder. Personally I’m all about the MC Kitch-featuring Ghetto Funkalicious with it’s ‘Ghetto…funka…licious’ opening chant though. Bounce y’all!
(Out now on Breakbeat Paradise Recordings)