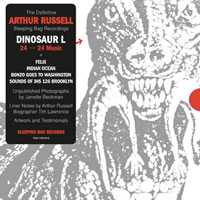 Disco visionary and eccentric arty nutter Arthur Russell, a.k.a. Dinosaur L, was barely rated in the 70s and 80s when he was actually making music. Russell tended to laugh in the face of traditional song structure and final edits but that didn’t stop Go Bang! and Is It All Over My Face (despite their Carry On Disco titles) becoming massive disco club hits. Both of these feature on the soon-to-be-released collector’s edition repress of 24>24 Music (Russell’s first album) the vinyl version of which, like the first pressings of the original release, comes with a hand-pulled screen print cover. Have some of that digital kids.
(Out 31 October on Get On Down)

(PRESS RELEASE)
Though classically trained Arthur Russell’s major contribution to the music world was in the dance genre. Despite the fact that his pioneering work in the late 70’s and through the 80’s was only quietly acknowledged at the time his long term impact on the genre is best described as formidable.

Russell’s innovative; left field dance records were way ahead of the time, in part due to his involvement New York’s downtown avant-garde music scene. He scored several hits on the underground New York dance scene at clubs like The Paradise Garage (Larry Levan was a huge supporter). His biggest tunes, ‘Go Bang!’ and ‘Is It All Over My Face?’ were worldwide club hits and are still played today as classics.

Sleeping Bag Records and Traffic Entertainment Group are proud to present his seminal work, ’24>24 Music’ expanded to a deluxe double CD box set issue. In addition to the music found on the original issueof ’24>24 Music’ this set includes rare 12″ remixes and edits including the highly coveted ‘Go Bang! (Walter Gibbons Mix)’ and the never before on CD ‘You Can’t Hold Me Down (Test Pressing Version)’. Both discs are housed inside beautiful full color sleeves that tuck into the extra durable box along with a 48 page booklet featuring unreleased photos by Janette Beckman and other Russell ephemera with words courtesy of Russell biographer Tim Lawrence.