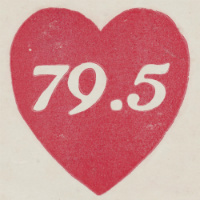 Yes, Boy Don’t Be Afraid was out before but with Brooklyn’s 79.5 (yet another jewel in Big Crown Records’ already jewel-encrusted – er – crown) announcing that they’re releasing debut LP, Predictions, in September, it seemed like the right time to put it out again, albeit with slight modifications. Thus label boss, Leon Michels (for it is he) has nudged the bpms down a smidgin, added a bit of Wurlitzer, some extra percussion and hey presto, it’s now a fever dream of how pop might have turned out had things stayed on a pathway involving organic instruments in the late 70s and ends up sounding a bit disco and a bit Minnie Riperton.
(Digital out now/ Vinyl out 13 July on Big Crown Records)