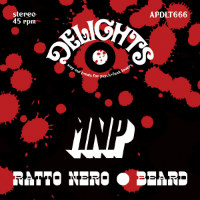 Next from the aptly-named Delights label comes this new 45 from Brighton-based psych-funk outfit MNP in the form of the sinister double-header of Ratto Nero and Beard. The first of these provides a pysch-funk soundtrack to being hung up on a meathook and flayed, then having to watch while the perpetrator dons your skin like a bleeding suit. We’ve all been there. Beard on the other hand is the pysch-funk soundtrack to being chased through an empty tenement building in a silent, deserted city when you’ve got two broken limbs and your pursuer is a nimble but giggling idiot armed with an array of surgical blades. You can tell Halloween’s on the way can’t you?
(Digital out now/ Vinyl ships 27 Oct. on Delights)