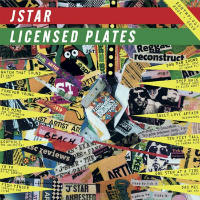 Is that seismic activity? A low level unscheduled military transport flypast? Relax – it’s just the bass on the new LP from reggae mash-up/ remix king J Star LP. Licensed Plates he’s named it, rather cheekily for a man who cranks out bootlegs like they’re going out of style, though in this case it is actually true. All twelve tracks are actually legit – all officially sanctioned remixes or versions from the last seven years with nary a booty among them. Good god! JStar’s gone straight. Well almost. Actually, download it off bandcamp and you get a freebie in the form of a Regulate Rock – a dub version of his bootleg of a certain Nate Dogg and Warren G number. But fuck downloads – what you really need is a vinyl version. Bear in mind that this is a limited release of 500 copies though and, at the time of writing, with over a month until release there are only 86 copies still available on pre-order. If that’s not a measure of the esteem in which this man’s work is held – I don’t know what is. Well, actually I do. It’s difficult to argue with big-ups from everyone from Diplo and Daddy G to Andy Smith and Don Letts.

The LP is a somewhat dubbier affair than most of JStar’s best known bootlegs – you know the ones – that reggae No Diggity version for example or Pharcyde reggae booty Still Passin Me By. Head for the remix of Capitol 1212’s Tenor Fly-featuring Don Man Sound for the big club banger, elsewhere – expect to get your spliff on as a host of luminaries of the modern reggae and ska scene get JStar-ed. Check the player below for a full preview and tracklist but be sure you give his dub take on Madness’s Forever Young, or his re-version of his Mr Dero collabo with Farina Miss a listen.

The album will be available on vinyl for vinyl heroes, as well as cd and digital. The cover art is a collage from the man himself and he’s persuaded French pro-snowboarder Hugo De Vimes to provide the inner sleeve artwork. Do bear in mind that you won’t get Regulate Rock on the vinyl though you will get JStar’s remix of Magic Fly’s Play That Funky Reggae as an exclusive free digital download with the free LP download code that comes when you buy wax. Oh yeah – there’s also an LP of all-original JStar material on the way too. Hear me now!
(Out 25 February on JStar Records)