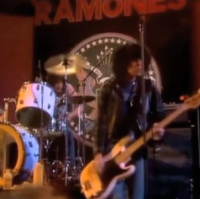 Ponder for a minute the way the net works. By net-work. Last year Harvey K-Tel and Snorkie produce Babylon Bop (genius reggae edit of The Ramones’ Blitzkrieg Bop) which gets blogged by the monkey. Then The Allergies produce dope Salt N Pepa mashup Pick Up Lines for which Canadian DJ Tanner made a fresh accompanying video. Both of which get blogged by the monkey in a post which later gets read by DJ Tanner who starts to follow the monkey who puts Babylon Bop on this year’s MB mixtape Filthy Rhythm Dirty Soul which gets downloaded by DJ Tanner. Who then produces an unofficial video for Babylon Bop and contacts the monkey. Who contacts Harvey KTel about the vid, who loves it because he was going to do something similar but didn’t have the time which kind of makes it official, except that none of the surviving Ramones or their record companies know about it. Which all gets blogged on the monkey. I don’t know where this is going to end – but I’m digging the ride. Hey ho! Let’s go!