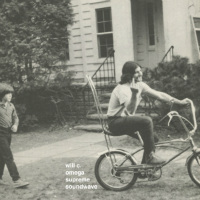 Will C might have had some material out in the recent past but he hasn’t had his rap hat on for two whole years. According to the man himself though, he recently emerged from his cocoon and banged out Omega Supreme Soundwave (the LP heralded by the drop of album track Ancient Spirits earlier this month) in less time than I’ve had it to listen to and write about. The whole thing was apparently (w)rapped in fortnight in fact. Not that you’d notice of course. We’re not talking about a man who does anything haphazard or slapdash and those familiar with his previous material will know he is both super-tight on the mic and a perfectionist in the studio. Which means he probably didn’t get any sleep in the two weeks he took to make this. Unless he was in an alternative dimension where time elapses at a different speed. Or driven by ancient spirits. I wouldn’t be surprised by either.

If you’re not familiar with previous Will C material you won’t be aware that the Boston rapper/ producer/ videographer has hobnobbed in the past with Zappa/ Beach Boys sound engineer Stephen Desper – an influence you’ll notice in his layered, psychedelic production. You also won’t be familiar with his staccato delivery of half cerebral/ half battle diss rhymes or his obsession with the devil’s decade of the eighties. In fact, in terms of sounds and sample choices employed, listening to a Will C record is not unlike listening to an alternative-universe version of fellow Boston MC/ Producer Edan who is obsessed by an era when hi-tech computer screens were green. Nowhere is this better exemplifed than on the aforementioned Ancient Spirits but other high points include a guest appearance by Boston MC Boycott Blues on the track of the same name or the electro breaks/ synth/ horn-fest of Will C’s Theme. I like to think of listening to Omega Supreme Soundwave as being a bit like slipping back into a vast black PVC and chrome armchair, tuning in to the original Battlestar Galactica and having your mum use Big Trak to deliver munchies from the kitchen. An evocative and strangely comforting sense of going back to the future in other words.
(Out now on Double You Productions)