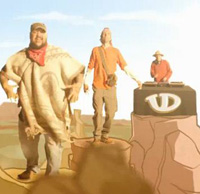 Boom! Everyone’s favourite cartoon old-school hip-hop crew, Ugly Duckling, finally release the long overdue video to Elevation – the dancefloor-banger highlight of their fifth and latest LP Moving At Breakneck Speed. Made with the intention of bringing the album’s Looney-Tunes style cover art to life expect to see our heroes’ entrance preceded by a Roadrunner-like ball of dust speeding across a cactus-studded cartoon desert, Einstein’s deck technique inspected by some sort of pigeon and Andy C fired out of a cannon. Animated by Justin Ridge and directed by Stoney Sharp, it’s the first video off the album and also features comedians T.J. Miller and Zack Pearlman and several other members of the UD crew I’ve never heard of – though if any of the ladies dancing at the end ever need a personal guide to Bristol, I’ll be happy to oblige. Now, if only that pesky album can finally be made to appear on vinyl…it’s only four months late! Video and soundcloud player of track below- and download the track free in return for signing up to the UD Facebook page. Blimey! Enjoy – no one makes party hip-hop bangers like these anymore!

Posted on 23rd February 2012 no comments