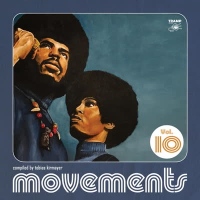 Next up from Tramp Records is the latest installment in one of their longest running compilation series’ – Movements 10. A whole two years in the making, this one sees the label’s crew curating tracks that span the period from 1958 all the way up to 1979. Which means that this time the collection encompasses everything from swinging big band R&B, soul-jazz and mod groovers, Latin-soul and low down dirty funk.

It is traditional with Tramp comps. to order tracks so that the oldest material comes first which is also broadly the case on the seventeen (or nineteen – depends on your format!) tracks assembled here. Having said that, it looks like opener – Frankie Greer Quartette’s louche piano-based swinger Spooky – is actually not as old as the second track – Bill Beau Trio’s Early In The Morning. This, it turns out, is a Hammond-infused, swampy groove on which the female vocalist does such a Sugar Pie DeSanto-esaue turn, I’d be surprised if it wasn’t her. The swinging and grooving vibe continues with subsequent tracks from Eunice Haze, Phylis Hendricks and the Eddie Buster Band which are all notable for having appeared on the sole 45s recorded by each of those artists. Stylistically things take a turn when the funkier rhythms of Johnny Spinosa and The Music Makers’ Hammond-funky Come On appears. The super-brisk Mustang Pts 1 and 2 from The New Philadelphians should also excite with a hint at what sixties DnB might’ve sounded like. The Kats’ Under The Covers is a big mod heater and one of the LP highlights and followed four tracks later by another – Brazada’s dreamy Latin groover El Mexicano. After this it’s funk all the way to the end.  First you get the flute-toting, wah-wah chugging Little Sister Pts 1 and 2 from The Headliners followed by the the bass-poppin, sax-led Body Wave from Victoria.  The penultimate track is Maxwell’s disco-era Radiation Funk from ’79 while the closer – and the monkey’s favourite cut on the whole thing – is the stanky funk of Starfoxx’s Oh Linda – -here’s hoping that gets a 45 release!  As with the start, the end isn’t quite in strict chronological order either – Oh Linda‘s release preceded Radiation Funk‘s by six whole years.  But we won’t hold that against Tramp, right?
(Out now on Tramp Records)

Posted on 29th February 2020 no comments