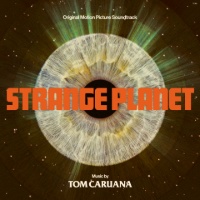 As heralded by the arrival of single Bounty Hunter On The Rise featuring Kosyne last week, Tom Caruana’s new album, Strange Planet is imminent. Long famed for epic mashup LPs such as his Wu-/Beatles Magical Mystery Chambers and Wu-/Hendrix Black Gold, Caruana is also the brains behind sterling all-original hip-hop releases such as 2017’s equally epic Son Of Sam, Cinder Hill LP. So when news of an all-new, all-original Caruana project comes in from deep space, it is cause for anticipation and – as even the first listen will confirm – celebration.

Strange Planet unites Caruana with MCs from both sides of the pond for a retro sci-fi boom-bap concept LP and in doing so shares some common ground with the lyrical and production preoccupations of Deltron 3030  and Kool Keith along with, frequently, the psychedelic production sound of Edan’s Beauty & The Beat album.  And while a twenty-three track set is always going to seem like a bit of an ask for punters, this one at least turns out to be the opposite.  Indeed, listening to it is more like sinking into a cavernous comfy armchair in a low-lit cosy room where a vast old wood-panelled cathode ray TV set plays only sci-fi stuff from the 50s to the 70s – probably scripted by Nigel Kneale and starring anyone from Peter Lorre to Jane Fonda.

As indicated above, much of the music on this draws from retro-psychedelia and library music samples and/or influences.  This is clear from the RP-inflected tones of the vocal sample on the opening credits and the retro organ that launches King Kashmere vehicle Stranded which buries what sounds like an Ethio-jazz loop deep in an exo-skeleton of bleeps and a clattery drum break. Mr Lif is up next on Critical Status, a tense cut which recalls the MC’s dope I Phantom-era material. And so it goes, as an impressive cast of US and UK emcees (the others not previously mentioned are Jehst, Billy Woods, Denmark Vessey, Lee Scott, Paten Locke, Confucius MC, Willie Evans Jr, Magestik Legend, Joker Starr, Prince Po, VVV (a.k.a. Juga-Naut, Cappo & Vandal Savage), Boog Brown, Scorzayzee, Skuff and HPBLK) deliver the goods all the way through to the squelching, bleeping scratch-fest of Dillon-featuring closer Chains.  Make sure you keep your ears pricked for the  DOOM-ish feel of Sandbag Veteran feat. Willie Evans Jr.,  the Paten Lock-featuring Pig Meat and the strings ‘n sitar-powered Hostile feat. Boog Brown and Magestik Legend – though having said that, you could pick any track from Strange Planet and land your ears safely on it.  The album comes out on pretty much all extant formats known to mankind which is to say, digital, 2xLP (in picture disk, clear/green splatter, orange or black options), CD and (the devil’s format) cassette and on top of which – the artwork is by Mr Krum too!
(Out 4 March on Tea Sea Records)