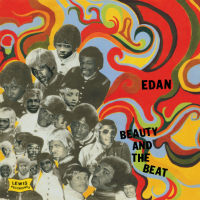 The late nineties and early 2000s were an incredibly fertile time for underground hip-hop and two of the LP highlights from that era were Boston producer/ MC/ DJ Edan’s only two studio LPs to date. Debut, Primitive Plus made big waves but what followed was bigger still – a hip-hop Sergeant Pepper’s…to its predecessor’s Revolver. Utterly psychedelic from the swirling colours of its cover to the very last bit of echo, feedback, dusty loop, psych-rock and acid-funk sample, this LP regularly places in all-time LP lists – top thirty in FACT’s ‘Best Indie Hip-Hop Records of All Time’ as well as being included in NME’s ‘500 Greatest Albums of All Time’ – note – not just hip-hop – any genre.

And so it was that nearly fifteen years ago, assisted by Percee P, Mr Lif and Dagha and toting a Cut Chemist remix, Edan released a classic. And if he hasn’t done a solo LP since then, perhaps it’s not surprising, the creative effort alone must have been exhausting – plus how do you top something like that? The LP’s scope is capture by tracks as different as the dancefloor boom-bap of Fumbling Over Words That Rhyme while the backwards loops and slowed down Hollies-sample on Smile are every bit as trippy as its Brian Wilson LP namesake. Frankly, every cut on this is a gem, though the two-part, Mr Lif-featuring acid-fried epic of Making Planets and monstrous sci-fi hip-hop beast Rock N Roll (feat. Dagha) probably capture its essence best. Anyway – it’s back out now on original label Lewis Recordings and available on vinyl for the first time in the best part of a decade so if you didn’t cop it before – don’t sleep now.
(Out now on Lewis Recordings)