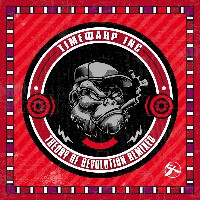 If you didn’t know better, it would be a reasonable to think that Theory Of Revolution Remixed might be the second crack of the whip for Timewarp Inc.’s fourth studio LP Theory Of Revolution from 2019 .  In truth though, it’s actually the third since an instrumental album followed mere weeks after the original one dropped. As the title of this release indicates however, what you’re getting is re-rubs of the original material – and then some – given that there are no fewer than twenty-six tracks here.  And from that you can no doubt divine that some of the original’s nineteen have been remixed more than once, which is indeed the case.  The set includes no fewer than three versions of Realistic and I’ll Be Ok apiece plus three of Discogirls – along with the instrumentals of these remixes plus the instros for the Restart, Economic Boom and Yuil Disco Boom remixes too. Genre-wise, the album takes in reggae, hip-hop, funk, disco and house and arguably the best of the lot are the mellow groovin’ Jazznut version of Realistic and the scratch-laced RSN remix of Liberty Is Our Destiny – though clearly, with the amount and choice on offer, there’s probably something for most on here.
(Out now on Timewarp Music)

Posted on 27th February 2022 no comments