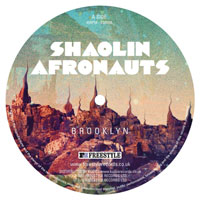 The band with the best name in Afro-influenced funky music return with what is presumably a tribute to one of the five Boros’ although with a name like theirs you might have expected them to pick Staten Island and with the sort of names David Beckham picks for his kids (like, say, Brooklyn) Shaolin Afronuats might wish they had done. Don’t expect afrobeat though (if that’s your bag head for the flip with its live version of Kilimanjaro) for A-side instro Brooklyn is more like a moody seventies cop show theme with an afro-jazz bridge – which I shall refrain from referring to as the Brooklyn Bridge. Think a big sweeping long shot of NY city in the summer taken from a helicopter in grainy seventies footage which then cuts to a swiftly edited montage of close ups depicting drug-deals, police-raids, kids playing in water hydrants and you’re ballpark for the video that should accompany this. Perfect for summer.
(Out 18 June on Freestyle Records)