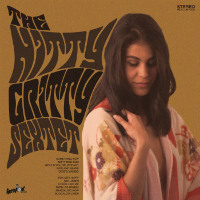 Ten tracks of boogaloo, mambo and latin jazz and a cover adorned by a retro Latina beauty? It’s not a new Ray Lugo LP already is it? No – something even more amazing and a massive coup for Spanish label Rocafort Records. It’s a 1967 LP believed to have been utterly lost and featuring the Nitty Gritty Sextet – a latin soul supergroup numbering among their personnel: the mighty Tito Puente, Jimmy Sabater and Louie Ramirez! Good lord! And the story of how this release came about is as good as the music – which is to say excellent.

There Rocafort were, giving latin production legend Bobby Marin a shout to see if they could license two extant Nitty Gritty Sextet cuts for a 45 when Marin tells them, there was actually a whole LP recorded back in the day. Score for Rocafort! Could they license this? Sorry – all the masters were lost decades ago. Bugger! And then in a coincidence so felicitous you’d castigate any story it appeared in as the work of a hopeless amateur the only existing master acetate re-surfaces in a Pennsylvania thrift store six months later! You wouldn’t dare make it up. But it happened – and here is The Nitty Gritty Sextet – by The Nitty Gritty Sextet.

The two cuts originally sought by Rocafort for a 45 release kick off the LP in a manner sure to excite mod-soul diggers with a penchant for a latin twist. Even these however pale beside the crazy Hammond and latin percussion antics of Fun City Hippy, the urgent salsa of Papel De Bambu, boogaloo soul closer Shingaling Now, Boogaloo Later and best of all the massive party boogaloo of Say Listen. Throw in a mambo and some mellow latin lounge numbers and you’ve got yourself some classic Nu Yorican gold.
(Out now on Rocafort Records)

One Response to THE NITTY GRITTY SEXTET: The Nitty Gritty Sextet (2015)