THE NEXTMEN VS GENTLEMAN’S DUB CLUB: Pound For Pound 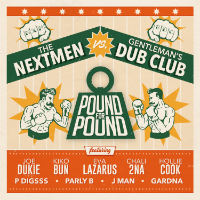 You might expect an outfit with a name like Gentleman’s Dub Club to be as relaxed as the next men on the UK bashment scene regarding their release schedule – what with dub’s long association with partaking of a herb not commonly associated with activity. But what if the next men on the UK bashment scene were actually The Nextmen? Might such a juxtaposition not prompt a flurry of enterprise as each tried to outdo the other? Now’s your chance to find out as GDC follow last year’s Dubtopia and go head-to-head with The Nextmen on The Nextmen vs. Gentleman’s Dub Club album Pound For Pound which features such luminaries as Joe Dukie from Fat Freddy’s Drop, Chali 2Na from J5, Hollie Cook, Eva Lazarus, Kiko Bun, Parly B, Gardna, P Digss and J Man. Blimey – well that’s created a high (thank you, I’m here all week) set of expectations. But does Pound For Pound stand tall in the dancehall or get complacent in the basement? Let’s find out.

HIGHS AND LOWS feat. Joe Dukie
Might as well start on a high then – with a midtempo, minor-key, reggae bump that firmly establishes the LP’s hardcore-riddim-meets-vocal-pop-sensibilities vibe.

RUDEBOY feat. GARDNA
Big horns and even if that hook does sound like ‘Rootboy’ – one of the catchiest cuts on the LP…

SEE YOU NEXT TUESDAY feat. KIKO BUN
…as is this jaunty slice of sunshine. The perfect song to sing at work, to your ex or – hell – anyone else who’s harshed your mellow.

HOLLA MY NAME feat. Chali 2Na and P Digsss
Here he is then – hip-hop’s honey monster with Kiwi P Digsss on a moody one-drop rhythm…

MISTY EYES feat. EVA LAZARUS
…and here’s the other one of the UK reggae’s best two female vocalists on another dreamy riddim. Misty eyes? That’ll be the weed smoke.

ONE HORSE TOWN feat. J MAN
You wanna do reggae round here? You gotta ask J Man, GDC and The Nextmen.

COUNTY LINE feat. KIKO BUN
Sometimes I wake up inna trouble. We’ve all been there Kiko Bun – nevertheless you though you do sound remarkably relaxed.

RAISED ON THE AMEN feat. GARDNA
Is this the expected rumble in the jungle – after all Gardna is at pains to point out he’s a ‘junglist.’ Well there’s a crowd pleasing Amen break-based bridge amid the reggae.

DONE IT AGAIN feat. KIKO BUN
Kiko Bun’s in trouble again. It’s not the ‘Feds’ this time though – it’s his ex., the club bouncers, his taxi driver and his mum. Among others. Pop-savvy foot-in-mouthers’ anthem.

PRISTINE feat. EVA LAZARUS & GARDNA
“Looking sharp, pristine/ and my kicks they nice and clean,” Lazarus’s voice soars in appreciation of a well-turned pair of sneaks. And you won’t find the monkey arguing with that.

COMMENTS: A winner – like there was any doubt with those five monkey stars above. Another timely drop before the fiftieth anniversary St Paul’s Carnival.