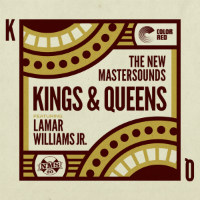 Following hot on the trail of first single Let’s Go Back, comes Kings & Queens – the second drop from The New Mastersounds’ forthcoming LP-length collab. with vocalist Lamar Williams, Shake It. The PR has this one billed as an ‘Average White Band meets Marvin Gaye’ type number and there is indeed plenty of funk bounce from the band (with guest horns) and vocal smoothness from Williams about a rocky relationship.  Another song about things not running quite as they should?  Go on then mate, what’s happened this time? She had her ‘momma on the phone’ and she wanted to be ‘alone’? ‘Putting the trash out is no aphrodisiac’? Well – quite.  You’re going to have to do a bit of grovelling mate – ‘I feed you/ We’re like cookies and cream,’…’We’re the king and queen’? – yep that’s the kind of thing – fingers crossed eh?
(Out now on Color Red Records)