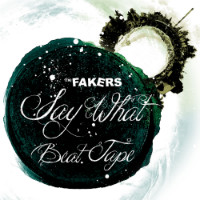 Meet The Fakers. Not a shit film starring Ben Stiller or a new puritanical religious sect but a hip-hop production crew of unknown number and identity with a new ‘beat tape’ entitled Say What? I’ve had two emails now – one from ‘Faker One’ referring to himself and his mates in the third person (“The Fakers do not want you too know who they are. We think they are DJs…”) and a ‘nudge nudge’ second one from ‘The Fakers’ (plural) but in the first person “I can’t tell you much about The Fakers accept they make hip hop and their identity is unknown. When asked to explain the Say What? Beat Tape, all they replied was that it was a breaching experiment and mumbled something about Garfinkle.” ‘Breaching’? ‘Garfinkle’? Say what? It’s just as bloody well the tape is very good or you wouldn’t even be reading this. To summarise – meet The Fakers: hip-hop producers of super-fresh retro-instro beats – and the dubious mystery of a cheap whore. I kinda like them. I think you will too…Check it below.

Posted on 19th September 2012 no comments