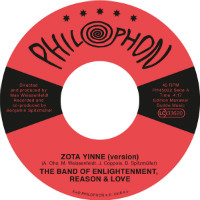 The Band Of Enlightenment Reason & Love eh? The name of the Philophon Records’ house band is certainly one to conjure with, consisting as it does of qualities sorely missing a voice in these benighted times. Luckily the band have been able to transmit positive vibes on their debut 45 via the medium of rootsy instrumental reggae on A-side Zota Yinne and gypsy-psychedelia on flip Starlet Road Filling Station. For added kudos, both cuts feature the talents of one Mr Jimi Tenor (!), playing flute and synth on the first track and wigged-out sax on the second. Have that!
(Out now on Philophon)