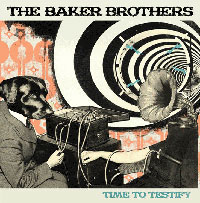 Ten years into their career and the The Baker Brothers’ seventh studio album Time To Testify is imminent. A mixture of vocal and instrumental tracks and – er – it’s jazzy. I was tempted to let monkeyboxing tea-lady Loretta May Drew (a very funky woman) review it but when I mentioned the words ‘jazz funk’ she threatened to serve me Earl Grey. Then I played it to monkeyboxing’s regular taxi driver ‘Jazzy’ Dave and he went, “Oh, I love Incognito,” and immediately started extemporising at great length about how the early nineties, “really was a golden era for funk music.” We had just got to my stop and I was about to ask him precisely what that had to do with The Baker Brothers but I noticed he’d under-charged me and thought better of interrupting his ‘flow’ as I got out.
(Out 17 October on Record Kicks)

(PRESS RELEASE)
A brand new full-length by The Baker Brothers, one of the most prolific funk & soul bands of the modern era!

With over 10 years worth of experience and a number of releases on labels such as Freestyle, Soultage, P-Vine, Emi and Loop Masters, UK funk & soul band THE BAKER BROTHERS can no doubt be considered veterans of their craft. In a time when many groups hardly last long enough to record a second album, this prolific outfit has managed to reach the venerable target of six full-lengths! For their seventh, and latest musical opus, The Baker Brothers pick things up where top singles “Once I Had a Friend” and “The Young Patter” / “Patience” left off. The result is “Time To Testify”, a brand new album that sees The Baker Brothers hitting their stride as they mix elements of modern soul, with funk, jazz and everything in between.

With its 16 tracks of explosive beats, edgy horns and smooth vocals, “Time To Testify” is a real testament to the longevity and creativity of this group. From soulful cuts such as “The Bottom Rung” and “Pieces Of The Puzzle” to surefire crowd-pleasers such as “Make Your Move” and “Feeding Freddie” and groovy instrumentals like “Genki Strut”, the seemingly effortless prowess of The Baker Brothers takes center-stage and holds no prisoners! If the first two Baker Brothers’ 45s on RK were intended to whet appetites, then “Time To Testify” definitively closes the deal. Now can I get a witness!

* tracks that only appear on CD