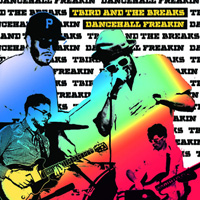 Texan chunk funk crew T Bird & The Breaks broaden their already catholic approach to the funk with the Dancehall Freakin EP, trying their hand at b-boy breaks on the one hand and squalling funk rock on the other. Normally accompanied by girl-backing vox, the ladies for whatever reason are noticeable by their absence on this. And apparently when the cat’s away at Breaks Towers it seems the mice throw down ridiculous superfast, hard-ass live drum breaks and guitar antics they know they wouldn’t be able to get away with normally. Cue the fretboard grandstanding of B-B-B-Burn on which the band take G Love & Special Sauce style blues-rap groove into the sort of territory the Red Hot Chili Peppers haven’t patrolled since Uplift Mofo Party Plan. Of the other four tracks, Just Getting Started rocks an uptempo break, the title track drops to hip-hop speed, Message From The Breaks goes p-funky and closer Hallelujah Glory Be is frantic car-chase wah-wah fest all finished off with T-Bird’s blues-drenched vocals alternating with the rapping that characterised much of his solo LP. This isn’t for jazz-funk pussies. Catch it before the ladies get back and the boys stand around looking sheepishly at the floor and mumbling about how the loud guitars were ‘his idea’ whilst guiltily pointing at each other.
(Out now)