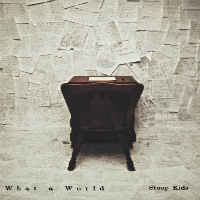 Are you busy? I’m bastard well busy – so let’s talk about chilling out instead. You know – taking a pill. Taking it easy. Taking time out – kicking back, chillaxin’, relaxing, having some ‘me’ time, some free time, some motherfucking easy time. Yeah. Oh – we need a soundtrack. How about some doo-hop? Some sort of doo-wop/ hip-hop hybrid perhaps? The very same. Meet The Stoop Kids from New Orleans and their highly promising debut long player What A World.

You’d think with all that flooding a few years ago and FEMA’s club-handed management of the situation that people from the ‘Big Easy’ would have something to be angry about. Maybe they do – though this LP might convince you otherwise. And it’s exactly what it sounds like too. Thirteen accomplished tracks of mellow boom-bap beats with a mixture of rapping and swoonsome forties vocal harmonies. A bit like G Love if he was into doo-wop instead of Philly blues. Music so laid back it’s less playing on your stereo than got its feet languidly resting on the speakers and smoking a jazz cigarette. Should probably be played on loud speakers in war zones across the planet.