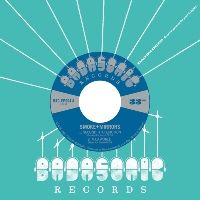 Second that Emotion is the second four-track reggae 45 this week from Badasonic Records and it’s another winner – this time courtesy of Smoke & Mirrors. That’ll be the lockdown brainchild of former Gangbuster John Roy who (as so many were), found himself frustrated by the enforced restriction of the pandemic and took it upon himself to write tunes, lyrics and arrangements, record the music, mix, master and get it pressed and subsequently enlist the help of thousands (well, more than fifty others anyway and, yes, including The Aggrolites’ Roger Rivas) to bring the music to life. The title track is also the opener – a lively gem stylistically pitched about halfway between the early reggae sound of ’69 and the early sound of Hollie Cook. Up next is a cover of a song that it seems impossible to do badly and as a reggae number works a particular treat – Mad World. Which just leaves another number reminiscent of the work of Hollie Cook – this time the more classic reggae sound of The Great Divide and that also appears versioned in dub form as the final track.
(Out now on Badasonic Records)

Posted on 10th November 2021 no comments