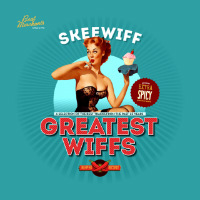 It’s always nice to host a premiere! And so it is that MB rolls out the red carpet as first place on the planet to bring you this: the mighty Skeewiff‘s re-wiff of Eddie Russ’s 1974 Blue Note-style jazz-funk number The Lope Song. He’s re-titled it Flute Toon in recognition of the original’s prominent funky flute motif and given it a massive party breaks kick up the arse (not to mention the odd bleepy adornment) so that it can hold its own among twenty-first century club fodder. Ooh la la. But what’s the occasion? Does somebody have a new release in the offing? I think they do! Yes – this is just the lemon next to the pie – as Bear once said on Big Wednesday. Skeewiff’s 16-track deep Greatest Wiffs collection of remixes is out next month on Jalapeno Records – about which more on MB soon. Keep your eyes peeled. Cop this below. You won’t find it on the album!

Posted on 28th November 2013 no comments