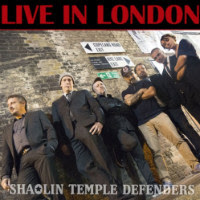 You might not have been there when the band with the best name in funk came to town, but Shaolin Temple Defenders ensure you get as close as possible to the experience with new LP, Live In London. Yep, not Live In Paris or Live In Bordeaux (for this latter city is in fact where the Shaolin crew hail from) but all the way live in London. There’s inter-European love for you – despite the overarching shadow of a certain political omnishambles.

Having said that, the idea of Remaining as the stance of a capital-based neo-liberal elite isn’t exactly dispelled by an alarming lack of audience response when singer Brother Lion mentions wealth inequality during the breakdown in fiery polemic Stop Whining. What have art cafes in Peckham come too? Luckily the crowd are less reticent in their response to the funk.  The LP features no fewer than five cuts off most recent studio album, Free Your Soul, along with live favourites like organ-based groove Spirit Of The South off From The Inside, and Take It Slow‘s uptempo scorcher Mr Dandy. There’s also time for them to knock out some cover action with a surprisingly un-cheesy version of Rufus Thomas novelty cut Funky Chicken and the drum break and wah-wah-tastic Medley Hip-Hop & JB. Shaolin Temple Defenders then, still exporting the funk despite all that Brexit uncertainty.
(Out now on Soulville Bordeaux)