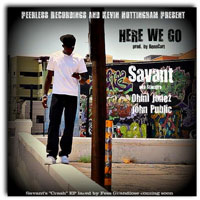 ‘Here we go’ indeed as Savant continues his Crash Course: Leak Series run of quality free downloads with one of the strongest tracks (and my favourite one) on it. This time around, Polish producer Benncart was the Tucson emcee’s go-to for a chunky boom-bap beat with understated, jazz samples – and it bumps! Man knows how to pick a beat! Jonez, Public and Savant then proceed to tear it up with, “flows tighter than Speedos.” Watch this space for more Savant closer to the release of his next EP and also that Krash Slaughta-produced monkeyboxing exclusive Savant track will probably be along at some point too…Click, click, boom!

Posted on 27th November 2011 no comments