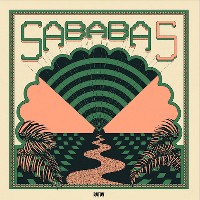 Finally, the self-titled debut album from Sababa 5, a band so skilled they can even make atrocious 80s novelty pop hit The Birdie Song by Black Lace sound like a funky Middle Eastern psych-folk classic from the 70s – I shit you not. But if such a transformation of said track still makes you feel queasy, fear not, for it doesn’t appear on this album. What you will find however are eight original instrumental grooves taking in traditional musical influences from Egypt, Ethiopia, Iran, Somalia, Sudan and Turkey and filtering them through jazz, funk and afro disco resulting in a fully Eastern psychedelic blend.

The band (ostensibly a four piece though the LP credits also list a percussionist) consists of a drummer, bassist, guitarist and keyboard player. Any track on the LP though (including single Lizarb) makes it clear that the band’s signature sound is pretty much dominated by the haunting keyboards of Eitan Drabkin. And for anyone who grew up with kids TV in the 70s and early 80s it’s a very recognisable sound – whether it be from John Barry’s much-used-by-the-BBC Florida Fantasy tune from the Midnight Cowboy OST or from the soundtracks of the multitude of Eastern European kids’ films the BBC used to buy in. Couldn’t tell you what the name Banga means but it’s this track’s lively groove which opens the album followed by the slower-paced a more reflective East African-influenced affair. The fluid psych-funk of single Lizarb follows that and if you’re not hooked by now, you never will be. But I suspect you will be.  Sababa 5 then, get transported!
(Out now on Batov Records)

Posted on 27th November 2022 no comments